THE STORY OF THE EL SALVADOR PROJECTS 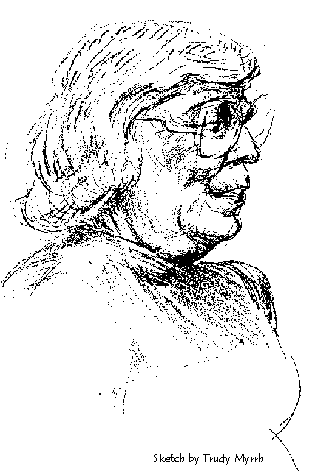 When Carmen Moran Broz left El Salvador in 1943, she always knew she would return someday to help her country. In the United States, she became a Quaker, and was convinced of the power of non-violent community action. After retiring from teaching in California in the 1980s, she returned in the midst of the Salvadoran civil war to establish education projects. A committee was formed in the Palo Alto Friends Meeting to assure that she have the support, financial and logistical, needed to keep the projects going. In 1986, she met struggling peasants when she joined an international group to accompany them back to their lands in a conflictive area, El Barío. In the belief that education can transform a nation, she helped them start a school in 1989. “It’s the quickest way to lift people out of poverty,” she observed. Illiteracy was widespread, and schooling unavailable past third grade. To keep children in school, she provided funds for children's’ shoes and uniforms and teacher salaries, in various communities. Quakers all over the United States contributed to the El Salvador Projects Committee to support her efforts. Working with community leaders, she convinced families of the importance of keeping their children in school and did everything she could to expand the schools. Now after many years, El Barío has a high school that is a magnet for surrounding communities. She had a knack for identifying communities who would work with her, some in remote parts of the country. Sending peasants to college in El Salvador would be a profound change, she thought. She obtained sponsors for students eager to continue. This became the student loan program, which boasts many graduates. The projects are now ably administered by Robert Broz, Carmen’s son living in El Salvador, and a local committee of community leaders.

A letter from the long time committee member, Trudy Reagan

Though you may be someone who has been following these projects for a long time, I think their accomplishments over time are very impressive when you see them together. I knew Carmen Broz in 1989 when she retired to her native country, El Salvador, to be of service. The war was still raging, which affected the day care center and nursery school she was just starting with Norma Guirola de Herrera. During a fierce city-wide battle in San Salvador, Norma was captured and killed! Carmen’s sons advised her to come home for a spell. She returned as soon as she could, to create her school for very young children of poor, marginalized women in San Salvador. In Palo Alto, our Friends Meeting recognized that some help was needed for Carmen stateside. Over time we formed a support committee to handle donations, do accounts, and to forward funds and supplies to El Salvador. When Carmen was in this country, we helped her with speaking engagements. She multiplied her efforts by working with community leaders already doing education work. For instance, in El Barío, a community she already knew, “popular teachers” were teaching children, they themselves learning as they went. With her help, the school expanded. In 1998, Carmen and her son Robert wrote a grant proposal to a Spanish NGO, which then gave materials to build a better school in El Barío. The community did the construction. In 1998, children she had first taught to read were graduating from high school, and her dream became to send the very brightest on to higher education in San Salvador. “Sending peasants to college would be like teaching slaves in the Old South to read!” she said, and she found sponsors for them. Thus, our student aid project was born, where ideally, students after graduation pay back the loans by service to the community or by helping others to attend. In this way also, several popular teachers obtained their teaching credentials. Since 1999 we have graduated 52 students. As well, capable leaders from groups in other parts of the country inspired her to grant small scholarships for K-12 school tuition, uniforms and supplies. One area was in rugged Morazán province. Just following the Peace Accords in 1992, she provided pediatric services until she got to know the community and the children, then she funded their education. In 1999, I visited Carmen and the projects and saw the postwar optimism and rebuilding! Shortly before, she and the University of Central America had organized the first ever AVP (Alternatives to Violence) workshop in El Salvador. Later, Lynn Mitchell and I visited around New Year’s in 2001. We had no sooner gotten back when a massive earthquake hit El Salvador, the first of two big ones! Special fundraising helped a community called Nuevo Jerusalén to rebuild. In 1999, Carmen was already preparing a transition to a time when she could no longer be there. Finding someone to actually direct the operations in-country was tough. Ultimately, her son Robert, working in El Salvador as an agronomist for another Quaker group, proved to be the best candidate! Since then, Robert has established remarkable rapport with the communities and the college-age students. With his community development and agronomy background, he has been able to see ways to extend the scope of the projects, again by working with people already doing good things. The project to teach how to build cheap, efficient and environmentally-friendly wood cook stoves is but one example. Over the years, cultural exchange with the projects has immeasurably enriched our Meeting with knowledge of the realities of the developing world, and the intelligence! the kindness! the resilience! of the people there. College student Bren Darrow went in 2005 and 2006, and helped start the AGE (Adults, Glasses, and Education) project, and Barbara Babin took teen groups down in 2006, 2007, 2008, 2011 and 2012. I myself spent three weeks in El Salvador in 2007, two of them with the Walls of Hope Art School in Perquin Morazan. We hope we inspire other groups to find a Third World community to partner with. I was, however, discouraged to find the political situation in 2007 less than healthy. When El Salvador adopted the dollar as its currency in 1999, and later, the Central American Free Trade Agreement (CAFTA), the losers were peasant farmers. The super rich in the ARENA (right wing) party are pushing their globalization agenda harder, and are beginning to use the demonizing label, “terrorists” on those who oppose it. So many peasants grow corn, only to be driven out of business by imported (and subsidized) American corn and then decide emigration is the answer. This has hollowed out communities. (However, money these emigrés send home is very welcome)! I was proud to see how our Morazán community leaders in El Gigante and Sueños en Jocoaitique are dealing with globalization. They are calculating what they can grow as a possible export crop: macadamia nuts. They raise bees, which will make macadamia honey. This is still in the early stages, but the bees are already finding other flowers, and the honey business is prospering! I was talking to Carmen the other day, and she told me again, “Poverty can be ended rapidly with very little money by educating each child.” On September 17 2015, Carmen Broz passed away, the work she started in El Salvador continues! —Trudy Reagan 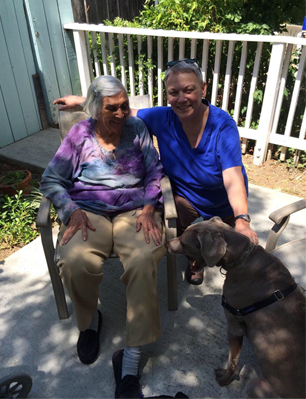 For more recent information about what we have been doing in El Salvador feel free to take a look at our past news letters.

Secure online donations can be made using any major credit card with the PayPal Donate button below.